Case 5 of the Mumonkan and Step 1


Case 5 of the Mumonkan

Mumon, Wu-men Hui-hai (無門慧開), was the Chinese Ch’an Master (1183-1260) who compiled this koan collection from earlier stories and “public cases” (Chinese: kung-an, 公案). He comments: "If you can respond to this dilemma properly, you give life to those who have been dead and kill those who have been alive." 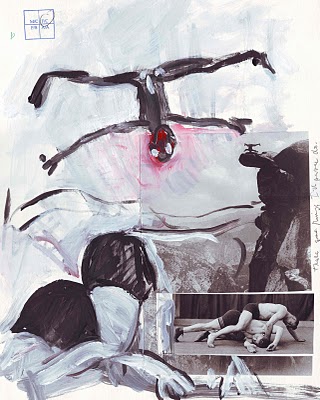 Here is case 5, "Hsiang-yen: Up Tree," as my teacher, John Tarrant Roshi, presented it during a retreat.

The priest Hsiang-yen said, "It is as though you were up in a tree, hanging from a branch with your teeth. Your hands and feet can't touch any branch. Someone appears beneath the tree and asks, `What is the meaning of Bodhidharma's coming from the West?'”

It has been at least 6 years since I looked at the case. I told another story about Hsiang-yen in a piece I wrote about a difficult and wonderful conversation that I had with my mother a few months before she died ("The Gift of Tears"). Hsiang-yen must have been an immensely gifted teacher if he continues to inspire others to be honest and human more than a thousand years after his death.

Today I find myself totally swept up in the hanging man's dilemma as I begin to re-work Step 1 of the 12 Steps. The Big Book of Alcoholics Anonymous puts the first step in simple, straightforward language: "I admit that I am powerless over … [alcohol, drugs, food, sex]—that my life has become unmanageable." It's just the first step on a journey, and in my case, there is a story connected with my personal surrender.

Even if I'd never heard of Bodhidharma, there are questions in my life that I can't evade—my life depends on my answer. It might not be entirely clear to a XXIst century reader that the question about Bodhidharma coming to the West carries an enormous weight for any monk or layperson practicing with a Zen Master. It is one of the keys that unlocks the wonder of the practice and the Buddha Way. He or she has to answer it.

I was asked a question that carried the same weight. It actually looked like a simpler one, deceptively so. At my first 12 Step meeting, when I heard the question, "Are there other alcoholics/addicts present?" I automatically answered, "Yes." At the time I couldn't grasp that the question was a life or death issue—I only vaguely acknowledged that there were real human beings involved. I certainly didn't realize that it would turn my world upside down. I was about to learn that answering it truthfully meant that I was about to lose a life I'd become comfortable with, even loved in a weird, perverted way. It was a life of deception and I'd learned to talk my way around it so well that even I believed its lies.

I had been practicing meditation for decades, and still I didn't recognize the Zen-like immediacy in the language—right now, right here, are there people in this room who suffering real biological and psychological effects of drug and alcohol abuse? Yes, I talking to you. If I'd really been paying closer attention, it might have been easier to see the delusions I'd have to give up to admit that I'd lost control of my life—if I ever had any. That is the baseline for any real conversation about sobriety. Another question seems follow an honest "yes:" Am I even sober enough to examine my addiction clearly and envision the kind of life that might open up if I were willing to move beyond denial? Who can I rely on as I began to examine my life? There is an answer and I had it—my sponsor was very direct: “Cut the bullshit and get real.” We all need real friends we can talk with, men and women who leave any pretense at the door.

Both the spirituality of the Big Book and Zen, I think, start from the same place: what experience got me stuck? It’s my dilemma, not the person on the cushion next to me, or the homeless guy stinking of urine on the bus that I can’t move away from. [At some point, I figured out that his dilemma has lots of the same identifiers as mine, but that recognition is not where I began]. In Zen I am never asked to believe anything outside my own experience, not even for a split second.

What transformed this question for me from an intellectual consideration about the nature of addiction and alcoholism to one with all the force of Bodhidharma's coming to the west and facing the wall for 9 years in meditation? I found myself hanging from a branch by the skin of teeth. My roommate had committed suicide, and I started binging. Very quickly I began spinning out of control. A friend asked me if I knew that I needed "a break."

After the shock of discovering my roommate's body dead for at least three days, when the police and medical examiners suggested that I call a friend, he was the man I called. My friend dropped what he was doing, came right over, put an arm around my shoulder and listened without any judgment to whatever came out of my mouth as they carried Dean's body down the stairs. As I look back over those few days and weeks, he proved the depth of his friendship even more: he wouldn't allow me to play the victim, "Oh you poor guy, how horrible!" or indulge any self importance or fake heroism to let myself off the hook—he reminded me I was just a guy who happened to be standing by when a tragedy unfolded. Of course I had to clean up a mess not entirely of my own making before I could move on. I had no other choice if I was going to choose life. He encouraged me to face the circumstances without drama, and get it done. Friends don't get any better.

So when this friend asked me about my binge, I felt an obligation to examine my life and answer him truthfully. It took me a few days to give him an answer, but that moment might have saved my life.

A long meditation practice follows me into the 12-step work, not as baggage but as a friend. When I listen to some person in one of the rooms coming to terms with the concept of a Higher Power, having been told that his or her program depends on acknowledgment and surrender to Something greater than the self, I can only admire the struggle and right-mindedness of their effort. My own experience was, at one time, very similar, but at some point the practice of meditation, or maybe just growing older with more life experience, dismantled most of the conceptual notions I had believed and put my trust in. What replaced it was a far more intimate sense of how I am, at the core of my being, connected to the profound inner-workings of the universe.

And even though my own inner experience started to become clear after long hours on the meditation cushion, I know that this path is open to anyone, even in a blink of an eye. So meditate. Just do it.

The instructions to enter the koan’s world are really quite simple: Sit down, straighten out your spine so that you can stay awake and alert, focus on your breath, and pay attention. That is probably enough meditation instruction to get started. Then as I settle into my meditation, if I choose, I can get real about how I respond to Hsiang-yen’s question, What do you do when you're hanging from a branch by your teeth? I put myself in the place where my life depends on my answer, where really, no kidding, I'm going to fall into an abyss when I open my mouth. I don’t believe anything, not even for a split second, that I have not experienced myself, but I have also come to trust, thanks to my Zen teachers, especially John Tarrant, and my own experience, that the koan will grab me where it needs to in order to shake an honest answer loose.

Perhaps our answer allows us to simply fall into the unknown, perhaps follow the example of the trees own leaves in the Fall. Thank you, Lucille Clifton, for the capping verse:

The Lesson Of The Falling Leaves

The Beginnings of a Christian-Zen Bibliography