Issan said, "I have things to do."


A friend was just diagnosed with advanced colon cancer. He asked his doctor if he could postpone the only treatment they recommended, a resection followed by chemo, for just a week. He said, “I have things to do.”


Yes, we all have things to do, and taking care of them is exactly what we are about. It is the crux of the matter, even if I have a great deal of trouble staying on top of it. I am caught so often between what I really have to do and what are imagined responsibilities. Where between my made up world and life as it presents itself Is there any space between for freedom? For me this story throws those questions into a new perspective.


During a Zen meditation retreat, we had been working with the koan “Little Jade.” It is enough to say that in the koan, the sound of a spoken name, the name of a servant uttered so that a secret lover can hear her voice, I reconnected to my old friend and teacher Issan Dorsey.


For some reason, or maybe none, memories about Issan had been surfacing during my meditation. The last ten or so days before he died were such a powerful experience that I have spent almost 20 years digesting the gift that he gave me, and many of his friends also received that gift. Those memories formed a kind of backdrop for work on “Little Jade,” and then suddenly connected me to that brief moment in way I had not felt since he died.


In much the same way, the phrase “I have things to do,” set off a massive chain reaction in my memory system, and that week sprang to life again


One night after his dharma talk about the koan, John Tarrant opened the floor for questions and comments. He had said that the real point of all our meditation practice was finding a place of freedom, no, it is not really a place at all, and I misspoke. He really meant FREEDOM, not some approximation or substitute that might be available when we experience a lesser degree of the suffering that goes hand in hand with life.


Here is the story I told that night and the one that my friend’s words brought to life again. I am trusting that I can write it with enough clarity to allow the freedom of the moment shine through this jumble of words spread across the page.


Issan had an appointment with his oncologist, I think it was on Friday but it might have been mid-week. It was to be the last time he left Hartford Street. He was quite weak. His skin was even more white and bleached looking then usual. It seemed like it was working hard to cover his bones. He was a sick man—he knew it, we all knew it. Steve Allen and Shunko packed him into the beat up car that had become a kind of hospice taxi and off they went to General Hospital.


About two hours later, maybe it was as long as three, they returned. I opened the front door. He looked even more white, almost ghost like, and the pain on his face brought tears to my eyes. He didn’t even look at me. I don’t think he could. He held the banister for dear life, while Shunko held onto him under the left shoulder lifting him from one step to the next.


After they reached the top and I heard the door of his room close, I turned to Steve who was still standing at the bottom of the steps and asked, ‘What happened?’


Steve’s voice seemed quite flat as he recounted the doctor’s visit. I am almost certain I recall the story with all the details that I am going to report, though I know that Steve’s emotions and mine have certainly colored what I will say.


They had waited for a long time. Issan was having an MRI, and the doctor was present. Steve described Issan as smiling as he was placed on the moving bed and the noise of the machine. Loud clacking began. Steve stood next to the doctor as they watched the pictures flash on a screen. The cancerous areas showed up as a soft glow, and Steve said that Issan looked like a Christmas tree—every part of his body light up.


The test ended. Steve, Shuko and Issan went into a private room with the doctor. He said to Issan, “You’re dying.” Steve said that Issan tried to smile and said, “Of course I know I’m dying, but I have things to do. It will take at least a month. I have to give Steve transmission, I have to ordain David and Harper.” I could almost hear his voice trailing off. The doctor looked at him and said (it is not difficult to imagine the tone of his voice. This kind of message can only be delivered with love), “No, Issan I don’t think you quite understood me, you’re dying now.” Steve described Issan’s response as a simple matter of fact question: “How long do I have?” The doctor told him that he could die at any time, or he might last a week, even ten days at the outside.


Before they left, Issan thanked the doctor for all that he'd done. An automatic “Oh, thank you” never came from Issan’s mouth and certainly not in this situation—they both knew that it would be their last meeting.


That doctor was the first of a long line of people who would say good-bye—and thank you.


When Steve spoke I understood the anguish that I saw in Issan’s face. The stage had been set for the last moments in his life. Here was a Buddhist priest, abbot, roshi, gay man, loved by hundreds of people, many who had never even met him, and certainly entirely a human being, clutching onto the banister as he struggled to get up the stairs.


I usually dropped into Issan’s room before the 6 PM meditation to see if he needed anything. Recently Steve and Shunko had been taking shifts to be with him all the time so perhaps Steve had asked me to check in that night so that he could get ready for meditation. I knocked and heard Issan’s telephone voice. That man loved the phone! I opened the door and he pointed to the chair next to him. He was talking with his teacher, Richard Baker. “Oh roshi, you can’t get out here before the 10th? That is too bad, the doctor told me just this afternoon that I won't last that long. Yes, I'll miss you too. I do love you. Yes, goodbye for now. I'll call again or have Steve call you if I have no energy." Here was a different man than the one who only a half hour earlier had been clutching the banister. And it was absolutely the same man but with a brightness in his voice that shocked me—if I said surprised, it would be far too mild to register the degree of the transformation that I felt. 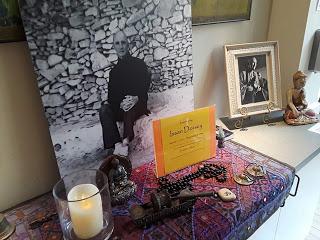 I can’t remember exactly what Issan said next, but after only a few minutes, I had clear instructions to make everyone who would he coming to say goodbye feel welcomed, and that I would do whatever Steve or Shunko asked of me. I was clear that Issan, through Steve, would orchestrate his last days, hours, and moments to accomplish as much as humanly possible of what was on his plate, and whatever that was would be exactly enough.


He was dead 10 days later, taking full advantage of the outside limit promised by the doctor. Richard Baker did come to San Francisco to be with his student and dharma heir before he died.


To read more reflections about the life of Issan, see some photographs, read his dharma talks, go to my Record of Issan page.