Jon has allowed me to repost his commentary on the koan "Little Jade."

I will attest that the monsoon has finally let up. Thank you, Jon. 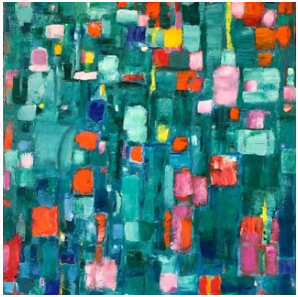 A treasury official retired and came home to Sichuan where he sought out Wuzu to learn about Zen. Wuzu said, "When you were young, did you read a poem which went something like:

“She calls to her maid,

not because she wants something

but just so her lover will hear her voice."

Wuzu said, "That is very near to Zen."

This is too rich a story-koan to leave its many parts unvisited, so I would like to sit with it again this week. The above exchange is deeply touching for me: a mistress of the house is calling to her lover through her maid, Little Jade. It is very near to Zen, says the teacher Wuzu. I have a warm memory of this koan, when a few years ago, at St Dorothy’s Rest, a moldering century-old building deep in a redwood forest, we were holding a week-long retreat. I walked into the kitchen to help with cooking, and found my retreat roommate, a former Jesuit novitiate, rooting and clanging through the industrial pots. He was calling out, “Little Jade! Little Jade! Where are you, Little Jade?” At that retreat, unbidden, he gave me a pair of new white socks, which I still have, though they now have holes in the toes.

It was all the more unsettling and heart rending, then, to read my Little-Jade friend’s recent blog posts on revisiting his first major love encounter as a gay man. What he thought was a friendship of growing mutual love and respect, turned out to be forced sex and rape, a pattern of emotional abuse that lasted for a quarter century. “I can find no silver lining in the story of my abusive relationship with B, but even if there were one, the relationship was so muddy that I don’t know where to begin to look,” begins his blog.

So how to resolve, for him, the many decades-long pain that recently revisited him? “It is my ghost,” he wrote me from Dharamshala, in India, where he now lives. An acquaintance of his and follower of the same psychic-spiritual school from those days, wrote that she herself was able to put her shadow behind her by “obliterating the traces of her parents’ negative influence" in a daily ritual of stamping out her family’s memories. She suggested my Little-Jade friend try the same. “Only time can judge its effectiveness,” my friend writes sardonically.

Last night I checked in with him via WhatsApp. McLeod Ganj, like all of India, is under stay-at-home orders; the dark downpour of the monsoon has not let up for weeks. “How are you doing?” I asked my Little-Jade friend, who is alone in his small apartment all day long. We talked about the dark nature of his posts, and laughed about Little Jade in the kitchen years ago. Despite the need, he felt, to write of his experience, he does know that “the Little Jade poem has been written more than once,” and that “it comes in more than one voice.” The variations of the Little Jade poem have allowed him to fall into some deeply satisfying love relationships in his life, he says. “I now write my own Little-Jade poem.”  I sent him Tony Hoagland’s piece, A Color of the Sky, one of my favorites (fragment below):

Years ago she penetrated me

I never got her out,

I thought was an end turned out to be a middle.

I thought was a brick wall turned out to be a tunnel.

What I thought was an injustice

turned out to be a color of the sky.

Perhaps the rain will let up soon. That would be very near to Zen.

P. S. Here is a link to the the writing Jon refers to: A Very Personal Question: Can I Forgive Bob Hoffman?